SCORED BY SIDNEY CROSBY IN GAME 6 OF THE 2009 EASTERN CONFERENCE QUARTERFINALS AT the wachovia center IN philadelphia.
Sidney Crosby scored 33 goals and assisted on 70 others for 103 points in 2008-09. His 70 assists was good enough for second in the NHL behind teammates Evgeni Malkin's 78 assists and his 103 points was third best in the NHL - 10 behind league leader Evgeni Malkin's 113 points. Heading into the Playoffs, Crosby embarked on a 16-game point scoring streak from February 16 to April 1, 2009 in which he scored nine goals and 18 assists for 27 points, a 1.69 points-per-game clip. In the Playoffs, Crosby had 31 points including a league-leading 15 goals. He scored in 17 of 24 games including 12 multiple point games en route to leading the Penguins to their third Stanley Cup in franchise history.

The Penguins met the hated Philadelphia Flyers in the 2009 Eastern Conference Quarter-Finals, a rematch of the 2008 Eastern Conference Final that the Penguins won four games to one. The Penguins won Games 1 and 2 in Pittsburgh to take a commanding 2-0 series lead before dropping Game 3 in Philadelphia and then put the Flyers on the brink of elimination by winning Game 4 in Philadelphia, 3-1. After the Flyers won Game 5 in Pittsburgh, 3-0, the Penguins went into Philadelphia looking to move to the Eastern Conference Semifinals for Game 6. The Flyers went ahead 3-0 in Game 6 just 4:06 into the second period and the series appeared to be headed to a deciding Game 7 back in Pittsburgh. 15 seconds later Max Talbot dropped the gloves with Daniel Carcillo and "shushed" the Philadelphia crowd as he headed to the penalty box. Ruslan Fedotenko and Mark Eaton scored at 4:35 and 6:32 of the second period, respectively, before Sidney Crosby tied the game at 3-3 with 3:01 left in the second period. Sergei Gonchar scored 2:19 into the third period before Sidney Crosby buried the Flyers with an empty net goal with 27 seconds left in the game on an incredible play in which he backhanded the puck off the Flyers net before retrieving the puck with one hand, came around the net to the other side and flicked a back-hander into the Flyers' net.

This puck was scored by Sidney Crosby at 19:33 of the third period in Game 6 of the 2009 Eastern Conference Quarter-Finals at Wachovia Center against the Philadelphia Flyers. The goal was Crosby's fourth of the 2009 Stanley Cup Playoffs and 13th Stanley Cup Playoff goal of his career. The even-strength empty net goal was unassisted. 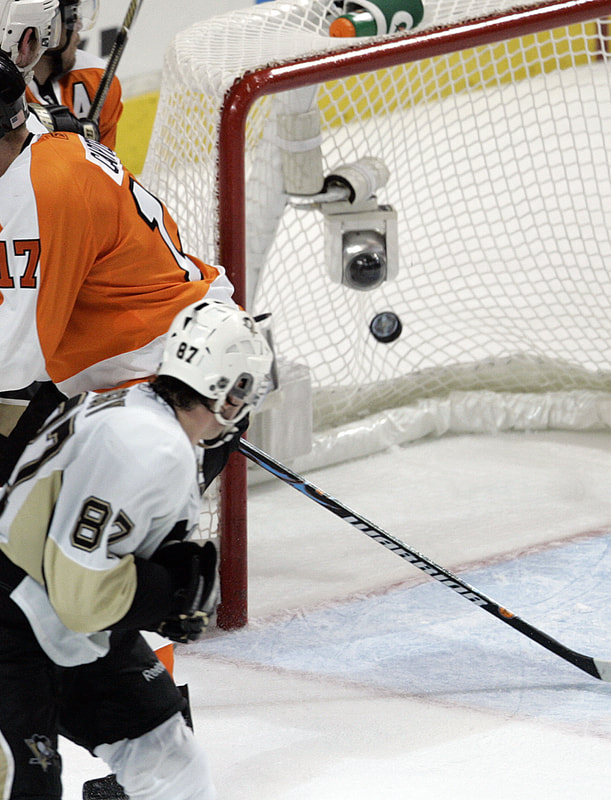 The puck was acquired by PenguinsChronicles.com ​​from a private collector on January 22, 2018. The puck was part of the Philadelphia Flyers-MeiGray Group Game Used Authentication Program. A Letter of Authenticity signed by Shawn Tilger, Senior Vice President Business Operations of the Philadelphia Flyers, and Barry Meisel, President & Chief Operating Officer of The MeiGray Group, was included with the puck.