SCORED BY SIDNEY CROSBY IN GAME 3 OF THE 2016 EASTERN CONFERENCE QUARTERFINALS AT MADISON SQUARE GARDEN IN NEW YORK.
Sidney Crosby scored 36 goals and assisted on 49 others for 85 points in being named to the NHL All-Star First Team in 2015-16. After scoring just six goals and 13 assists in his first 28 games, Crosby welcomed new Head Coach Mike Sullivan who was hired on December 12, 2015 to replace Mike Johnston. Over the next 52 games, he racked up 30 goals and 36 assists for 66 points, an average of 1.27 points-per-game. Crosby continued his elite play in the Stanley Cup Playoffs recording 19 points (6G, 13A) in 24 games while capturing the Conn Smythe Trophy as the Most Valuable Player of the tournament and leading the Penguins to their fourth Stanley Cup in franchise history.

The Penguins met the New York Rangers in the 2016 Eastern Conference First Round. After splitting the first two games of the series in Pittsburgh, the Rangers took control in Game 3 with Rick Nash's power-play goal 29 seconds into the second period. Late in the second period, with Marc Staal in the penalty box for hooking Carl Hagelin at 19:00, the Penguins power-play went to work. Just 18 seconds after the penalty, the Penguins regained the momentum of the game and series as Evgeni Malkin, who was set up at the left point, found Phil Kessel at the left circle faceoff dot who rifled a cross-crease pass to Sidney Crosby who deflected the puck past Rangers' goalie Henrik Lundqvist. The goal tied the game at 1-1 heading into the third period. Matt Cullen scored 4:16 into the third period to give the Penguins a 2-1 lead before Kris Letang scored an empty net goal with 13 seconds to play to seal the win. The Penguins took a 2-1 series lead and never looked back winning the next two games to advance to the Eastern Conference Second Round against Washington.

This puck was scored by Sidney Crosby at 19:18 of the second period in Game 3 of the Eastern Conference First Round at Madison Square Garden against the New York Rangers. The goal was Crosby's second of the 2016 Stanley Cup Playoffs and 45th Stanley Cup Playoff goal of his career. The power-play goal was assisted Phil Kessel and Evgeni Malkin. 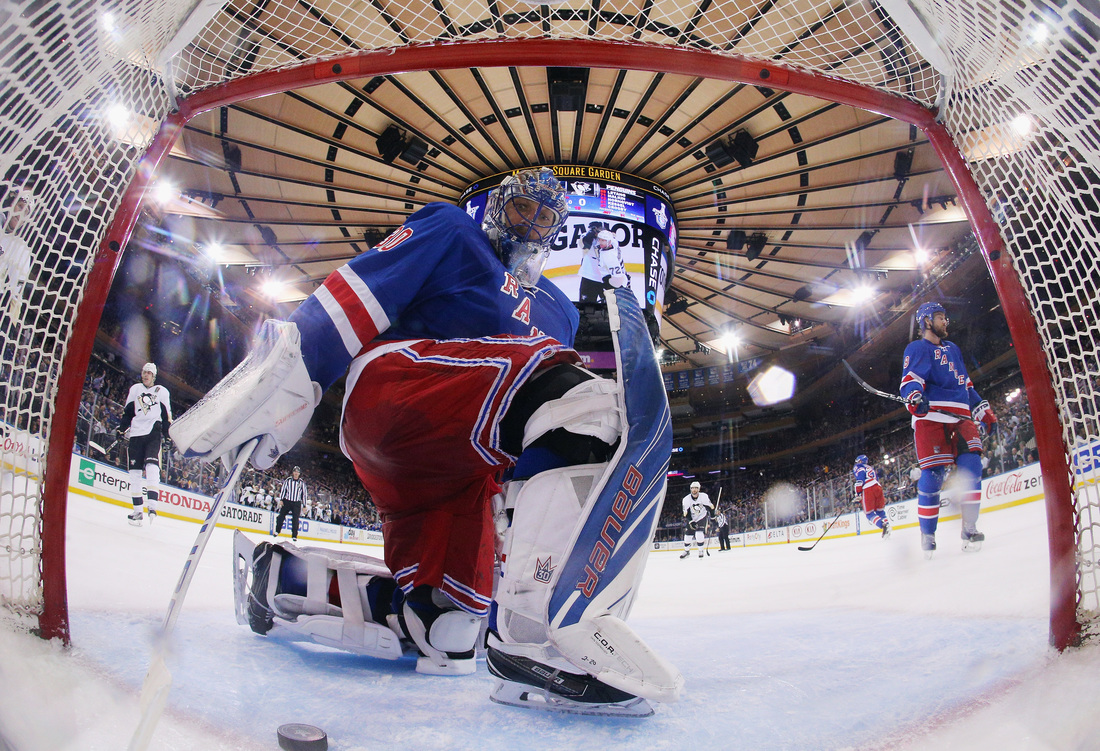 The puck was acquired by PenguinsChronicles.com ​​from NHL Auctions on June 2, 2016. The puck was part of the Steiner Sports Team Partnership program with the New York Rangers and was sold via The MeiGray Group at NHL Auctions. A Steiner Sports Memorabilia Letter of Authenticity and MeiGray Group Certificate of Registration were included with the puck.