For the fourth consecutive season, the Penguins are wearing adidas ADIZERO jerseys - a style and cut that was introduced at the beginning of the 2017-18 NHL season. The style was designed to take the hockey uniform and jersey silhouette to the next level by redefining the fit, feel, and construction of the jersey. The jerseys feature unique cresting materials and construction technology, adidas Clima® technology to deliver breathability and enhanced performance, and stronger threads and fabrics for durability.

The adidas logo is featured on the back neckline with a white logo embroidered onto black twill on the Home (black) jerseys and a black logo embroidered onto white twill on the Road (white) jerseys. The inside neckline of each jersey features "Made in Canada" in three languages (English, French and Spanish), the adidas logo, and the jersey's numerical size in three languages screened on. Inside the left side seam is a manufacturer's washing instructions tag.

Jerseys have been lettered and numbered by Pro Knitwear of Pittsburgh, PA.

On November 16, 2020, the Penguins introduced their new "Reverse Retro" jerseys which feature the PITTSBURGH diagonal script across the front with the non-golden triangle skating penguin logo on each shoulder. The jerseys harken back to the 1992-93 to 1996-97 era in which the Penguins wore black PITTSBURGH diagonal jerseys. The adidas Reverse Retro jerseys mark the first time that all 31 teams will participate in a League-wide alternate jersey program. adidas worked closely with the NHL and each team to design a Reverse Retro jersey representing unique and historical moments in each club's history, while refreshing the color and design combination for an all-new presentation.

The uniforms are intended to be worn for six games during the 2020-21 NHL season and debuted on February 1, 2021 at New York against the Rangers.

The Penguins would continue to wear "third" jerseys for the third consecutive season. The uniforms are intended to be worn for eight games during the 2020-21 NHL season and debuted on February 16, 2021 vs. Washington at PPG Paints Arena. The  design incorporates elements from the popular 2017 Stadium Series uniform while acknowledging the heritage of gold jerseys worn by Mario Lemieux and the Penguins in the 1980s.

"Creating a signature look for these new thirds, the crest spotlights the standalone skating penguin on a single-toned gold sweater. Mixing the past with the present, the contrasting black sleeves are highlighted with white and gold striping that are inspired from the Penguins' 1984 jerseys, while the letters and numbering mirror the current home and away jerseys. Additional design details include the sleeve numbers being raised to the shoulder of the jersey to mimic the 1980s look."

On February 20, 2021, the Penguins wore a special set of "Sidney Crosby" jerseys for pre-game warm-ups prior to the game against the New York Islanders at PPG Paints Arena to commemorate Sidney Crosby's 1,000th NHL regular season game. The jerseys were autographed by the players after the game and auctioned online, with proceeds benefiting the Pittsburgh Penguins Foundation. The jersey were identical to the Home (black) jerseys worn during the regular season minus Crosby's special customizations. A special set tag was also sewn inside the back hem of each jersey. The jerseys were autographed and auctioned on e.givesmart. The complete set of 20 jerseys were auctioned by the Pittsburgh Penguins Foundation from February 20, 2021 to February 28, 2021. The auction raised a total of $49,326.

On March 16, 2019, the Penguins wore a special set of "St. Patrick's Day" jerseys for pre-game warm-ups prior to the game against the Boston Bruins at PPG Paints Arena. The green jerseys featured the adidas logo on the right chest and special set tag was also sewn inside the back hem of each jersey. The jerseys were autographed and auctioned on GiveSmart with the proceeds benefiting the Pittsburgh Penguins Foundation. A total of 29 jerseys were prepared for the event with 28 jerseys (22 pre-game worn and seven pre-game issued) auctioned by GiveSmart from March 16, 2019 to March 23, 2021. Kasperi Kapanen's jersey was raffled off through GiveSmart. The auction raised a total of $40,246.

On March 21, 2021, the Penguins wore a special set of "Hockey Fights Cancer" jerseys for pre-game warm-ups prior to the game against the New York Islanders at PPG Paints Arena. Hockey Fights Cancer awareness night is held each season as part of a league-wide initiative to raise awareness and funds for cancer research. The black and purple jerseys featured a Hockey Fights Cancer patch on the left shoulder, adidas logo on the right chest, and an "I FIGHT FOR" jock tag on the lower left front. A special set tag was also sewn inside the back hem of each jersey. The jerseys were autographed and auctioned by the Pittsburgh Penguins Foundation on e.givesmart.com. A total of 31 jerseys were prepared for the event with all 31 jerseys auctioned benefitting the Mario Lemieux Foundation and UPMC Hillman Cancer Center from March 29, 2021 to April 5, 2021. The auction raised a total of $45,140. 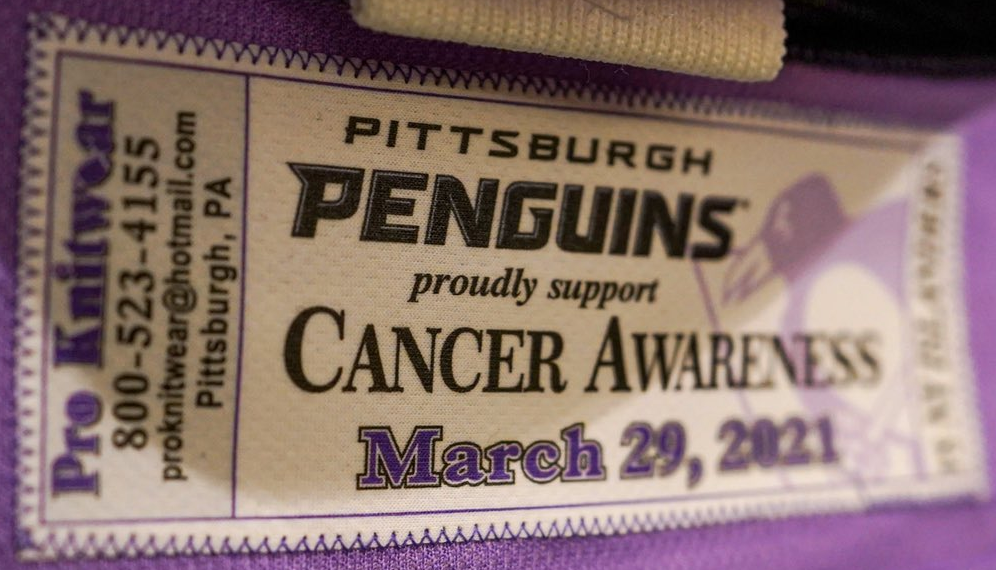