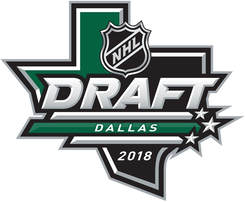 The 2018 NHL Entry Draft was held on Friday, June 22, 2018 (1st round) and Saturday, June 23, 2018 (2nd to 7th rounds) at the American Airlines Center, home of the Dallas Stars. The Buffalo Sabres won the draft lottery with Carolina and Montreal winning the second and third picks, respectively. Buffalo selected defenseman Rasmus Dahlin from Frolunda HC of the Swedish Hockey League with the first overall pick.
​
The Pittsburgh Penguins, who finished the 2017-18 regular season with 100 points including 47 regulation or overtime wins, would draft 22nd overall out of 31 teams in each round.

Pittsburgh's original first round choice (22nd overall) was traded on February 23, 2018 along with Ian Cole and Filip Gustavsson to Ottawa in exchange for Derick Brassard, Vincent Dunn and Ottawa's third round choice (64th overall) in the 2018 NHL Entry Draft. The Senators then traded the pick to the New York Rangers in exchange for the 26th overall choice (previously acquired from Boston) and 48th overall choice (previously acquired from New Jersey). The Rangers selected defenseman K'Andre Miller of the U.S. NTDP (USHL).

​     The Penguins selected defenseman Calen Addison from Lethbridge (WHL) in the second round (53rd overall). Addison led Lethbridge defensemen (and tied for 9th in WHL) with 65 points (11G-54A) in 68 games played in 2017-18. He added 19 points (7G-12A) in 16 postseason contests. Addison was a member of the gold medal winning Canadian team in the 2017 Ivan Hlinka tournament and won a silver medal at the 2016 World U-17 Hockey Challenge. He scored 65 points again during the 2018-19 WHL regular season (11G-54A) in 67 games. Addison added nine points (2G-7A) in seven WHL playoff games and appeared in three games with the Wilkes-Barre/Scranton Penguins in 2018-19 recording two assists.

The Penguins acquired the 58th overall choice in the second round from Colorado (previously acquired from Nashville) in exchange for the 64th overall choice (previously acquired from Ottawa) and Pittsburgh's fifth round choice (146th overall) in the 2018 Entry Draft. Pittsburgh selected center Filip Hallander from Timra IK (HockeyAllsvenskan) with the 27th pick in the second round (58th overall). Hallander was a member of Sweden's gold medal winning squad at the World Under-17 Hockey Challenge in 2016-17. He also won a bronze medal with Sweden at the Ivan Hlinka tournament. Hallander scored 20 points (9G-11A) in 40 games with Timra IK in 2017-18 and had 21 points (7G-14A) in 45 games in 2018-19. He played in five games during the U20 World Junior Championships in Canada and went scoreless.

Pittsburgh's third round choice (84th overall) was traded on October 21, 2017 along with Scott Wilson to the Detroit Red Wings in exchange for Riley Sheahan and Detroit's fifth round choice (129th overall) in the 2018 NHL Entry Draft. Detroit selected goaltender Jesper Eliasson from IF-Troja Ljungby J20 (SuperElit).

On March 1, 2017, Pittsburgh traded its fourth round choice (115th overall) in the 2018 NHL Entry Draft to Tampa Bay for defenseman Mark Streit. The Lightning subsequently traded the pick, the negotiating rights to Nikita Gusev and Tampa Bay's second round choice in the 2017 NHL Entry Draft to the Vegas Golden Knights on June 21, 2017 to ensure that Vegas would select Jason Garrison in the 2017 NHL Expansion Draft.  Vegas selected center Paul Cotter from the Lincoln Stars (USHL) with the pick.

With the fifth round choice (129th overall) acquired from Detroit in the Sheahan trade, Pittsburgh selected center Justin Almeida from Moose Jaw (WHL). Almeida ranked second on the Warriors with 43 goals and 3rd with 98 points in 2017-18. He represented Team British Columbia at the 2015 Canada Winter Games, and was named the British Columbia Hockey Now Player of the Year in 2013-14 after his Bantam season. Almeida began the 2018-19 season with Moose Jaw. During the 2018-19 WHL season, Almeida scored 33 goals and 78 assists for 111 points with Moose Jaw. He went scoreless in four WHL playoff games.

The Penguins selected center Liam Gorman from Saint Sebastian's School (USHS) with the 22nd pick of the sixth round (177th overall) in the 2018 Entry Draft. Gorman has committed to play for Princeton University. He posted 17 goals and 33 points in 30 games during the 2017-18 season and 16 goals and 22 assists in 24 games during the 2018-19 season with St. Sebastian's School.