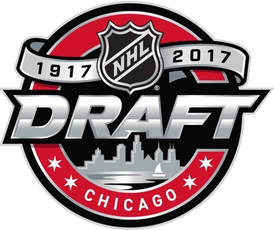 The 2017 NHL Entry Draft was held on Friday, June 23, 2017 (1st round) and Saturday, June 24, 2017 (2nd to 7th rounds) at the United Center, home of the Chicago Blackhawks. The New Jersey Devils won the draft lottery with Philadelphia and Dallas winning the second and third picks, respectively. The expansion Vegas Golden Knights won the lottery's sixth slot and chose sixth overall in the first round and third in each subsequent round. New Jersey selected center Nico Hischier from Halifax (QMJHL) with the first overall pick.
​
The Pittsburgh Penguins, who won their second consecutive Stanley Cup championship in 2016-17, would draft 31st overall out of 31 teams in each round.

Pittsburgh selected defenseman Zachary Lauzon from Rouyn-Noranda (QMJHL) in the second round with the pick acquired from St. Louis in the Ryan Reaves trade. Battline a recurring neck injury, Lauzon had four assists in 25 games during the 2017-18 QMJHL regular season and had no points and was a minus-2 in five playoff games. He won the Kevin Lowe Award, the same award won by Kris Letang in 2007, as the QMJHL's best defenseman after the 2016-17 season. Lauzon did not play at all during the 2018-19 season recovering from a concussion sustained in April 2017 after attempting comebacks during three separate stints during the 2017-18 season. His rights were relinquished by the Penguins in June 2019.

Pittsburgh's original second round choice (62nd overall) was traded on February 23, 2017 along with Danny Kristo to Carolina in exchange for Ron Hainsey. On June 22, 2017, Carolina traded the pick to Vegas in exchange for Trevor van Riemsdyk and Vegas' seventh round choice in the 2018 NHL Entry Draft.
​
In the third round the Penguins selected defenseman Clayton Phillips from the Fargo Force (USHL). Phillips began the 2017-18 season with the Fargo Force of the USHL before being traded to the Muskegon Lumberjacks on October 24, 2017. Phillips had 12 points (5g, 7a) in 16 games before joining the University of Minnesota for the second semester and the remainder of the 2017-18 NCAA season. He appeared in 11 games with the Golden Gophers and was a minus-3 with 11 shots on goal. In 2018-19, Phillips appeared in 34 NCAA games with Minnesota and had one goal and nine assists. Phillips is heading into his junior season at the University of Minnesota for the 2019-20 season.

The Penguins' original fourth round choice (124th overall) was traded on March 1, 2017 along with Eric Fehr and Steve Oleksy to Toronto in exchange for Frank Corrado.

On November 2, 2016, Pittsburgh traded goaltender Mike Condon to Ottawa in exchange for the Senators' fifth round choice (152nd overall) in the 2018 Entry Draft. With the fifth round choice acquired in the Condon trade, Pittsburgh selected Jan Drozg (152nd overall), a left wing from Leksand U18 (Sweden J18 Elit). Drozg finished his first season of North American hockey playing for the Shawinigan Cataractes of the QMJHL. In the 61 games of the Slovenia native’s rookie season, Drozg led the team in assists (34) and points (50) and appeared in one game for Wilkes-Barre/Scranton on April 15, 2018. He started the 2018-19 season with Shawinigan and had 62 points (21g, 41a) in 60 games before appearing in two games with Wilkes-Barre/Scranton to finish the season. On March 4, 2019, Drozg signed a three-year entry level contract with the Pittsburgh Penguins. The contract begins with the 2019-20 season.