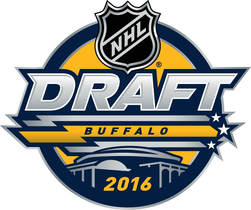 The 2016 NHL Entry Draft was held on Friday, June 24, 2016 (1st round) and Saturday, June 25, 2016 (2nd to 7th rounds) at the First Niagara Center, home of the Buffalo Sabres. The Toronto Maple Leafs won the draft lottery with Winnipeg and Columbus winning the second and third picks, respectively. Toronto selected center Auston Matthews from the Zurcher SC Lions of the Switzerland National League with the first overall pick.
​
The Pittsburgh Penguins, who won their fourth Stanley Cup championship in franchise history in 2015-16, would draft 31st overall out of 31 teams in each round.

The Penguins acquired Nick Bonino, Adam Clendening, and a second round choice (55th overall) from Vancouver in exchange for Brandon Sutter and a conditional third round choice in the 2016 Entry Draft which was acquired from Buffalo for hiring Dan Bylsma as their head coach in the summer of 2015. With the choice, Pittsburgh selected goaltender Filip Gustavsson from Lulea HF of the Swedish Hockey League. Gustavsson recorded a .910 save percentage and 2.17 goals against average in six games in the Swedish Hockey League during the 2015-16 season. He spent the next two seasons in Sweden before being traded to the Ottawa Senators along with Ian Cole and Pittsburgh's 2018 first round choice and 2019 third round choice in the Entry Draft on February 23, 2018 in a three-team trade which brought Derick Brassard, Vincent Dunn and Ottawa's third-round choice in the 2018 NHL Entry Draft to Pittsburgh.
​
With the re-acquisition of their original second round choice (61st overall) as a result of the Daniel Winnick trade in February 2015 and the subsequent Phil Kessel trade on July 1, 2015, Pittsburgh selected right wing Kasper Bjorkqvist from the Espoo Blues of the Finnish SM-Liiga. Bjorkqvist recorded 66 points (28G, 38A) in 45 games with the Blues in 2015-16. He then enrolled at Providence College and had 23 points (16G, 7A) in 40 games with the Friars in his sophomore season (2017-18). Bjorkqvist is currently playing his junior season at Providence College in 2018-19.