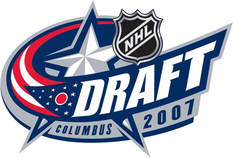 The 2003 NHL Entry Draft was held on Saturday, June 21, 2003 (1st round) and Sunday, June 22, 2003 (2nd to 7th rounds) at the Gaylord Entertainment Center, home of the Nashville Predators. The Florida Panthers won the draft lottery with Carolina and Pittsburgh winning the second and third picks, respectively. On draft day, Florida traded the first overall pick and 73rd overall pick to Pittsburgh in exchange for Mikael Samuelsson and the 3rd and 55th overall picks in the 2003 NHL Entry Draft. Pittsburgh subsequently selected goaltender Marc-Andre Fleury from Cape Breton (QMJHL) with the first overall pick.
​
The Pittsburgh Penguins, who finsihed the 2002-03 season with 69 points (28-41-8-5), would draft 2nd overall out of 30 teams in each round.