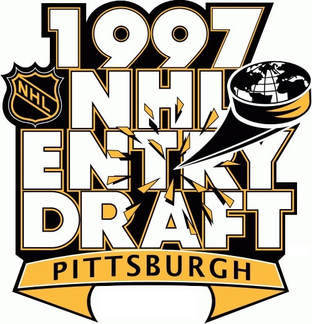 The 1997 NHL Entry Draft was held on Saturday, June 21, 1997 at the Civic Arena, home of the Pittsburgh Penguins. The NHL's two expansion teams for the 1993-94 NHL season - Florida and Anaheim - chose 1st and 2nd overall, respectively, despite finishing far ahead of the league's worst team - Ottawa (37 points). The Florida Panthers chose defenseman Ed Jovanovski from Windsor (OHL) while Anaheim chose defenseman Oleg Tverdovsky from Krylya Sovetov (Russia).
​
The Pittsburgh Penguins, who finished with 101 points in 1993-94, would draft 24th overall out of 26 teams in each round. On March 10, 1992, Pittsburgh traded goaltender Frank Pietrangelo to Hartford for Hartford's third round choice and seventh round choice in the 1994 Entry Draft. The Penguins sent Paul Stanton to Boston on October 8, 1993 in exchange for Boston's third round choice in the 1994 Entry Draft. This would leave Pittsburgh with 14 selections in the 1994 NHL Entry Draft.