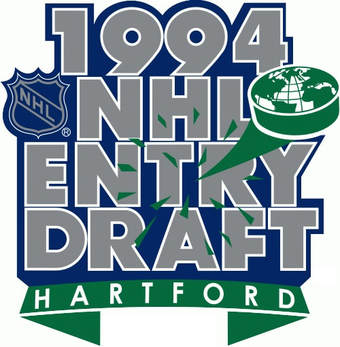 The 1994 NHL Entry Draft was held on Tuesday, June 28, 1994 (1st and 2nd rounds) and Wednesday, June 29, 1994 (3rd to 11th rounds) at the Hartford Civic Center, home of the Hartford Whalers. The NHL's two expansion teams for the 1993-94 NHL season - Florida and Anaheim - chose 1st and 2nd overall, respectively, despite finishing far ahead of the league's worst team - Ottawa (37 points). The Florida Panthers chose defenseman Ed Jovanovski from Windsor (OHL) while Anaheim chose defenseman Oleg Tverdovsky from Krylya Sovetov (Russia).
​
The Pittsburgh Penguins, who finished with 101 points in 1993-94, would draft 24th overall out of 26 teams in each round. On March 10, 1992, Pittsburgh traded goaltender Frank Pietrangelo to Hartford for Hartford's third round choice and seventh round choice in the 1994 Entry Draft. The Penguins sent Paul Stanton to Boston on October 8, 1993 in exchange for Boston's third round choice in the 1994 Entry Draft. This would leave Pittsburgh with 14 selections in the 1994 NHL Entry Draft.

Pittsburgh selected center Chris Wells from Seattle (WHL) in the first round. He made his NHL debut on October 21, 1995 vs. Los Angeles as the Kings defeated the Penguins, 3-2, at the Civic Arena. Wells would go on to play 54 games with the Penguins during the 1995-96 season netting two goals and two assists before being traded to Florida on November 19, 1996 for Stu Barnes and Jason Woolley. Wells played parts of the next four seasons for the Panthers and finished his NHL career with 195 games played, nine goals and 20 assists.
​
Center Richard Park, Pittsburgh's second round choice from Belleville (OHL), would go on to make his NHL debut for the Penguins on May 3, 1995 when he picked up his first NHL point in a 4-3 loss to Florida at Pittsburgh's Civic Arena. Park also played three playoff games for the Penguins in 1995. After playing 56 games in 1995-96 and just one game during the 1996-97 campaign for Pittsburgh, Park was traded on March 18, 1997 to Anaheim for Roman Oksiuta. Park returned to the Penguins as a free agent prior to the 2011-12 season and played in 54 games accumulating seven goals and seven assists in the regular season and one assist in two playoff games. He had 102 goals and 139 assists in 738 career games in the NHL.

​     Sven Butenschon, a defenseman chosen in the third round with the pick acquired from Boston in exchange for Paul Stanton, made his NHL debut with Pittsburgh on October 19, 1997 at Florida. He played sparingly for the Penguins over the next four seasons before being traded to Edmonton on March 13, 2001 for Dan LaCouture. Butenschon went on to play with the Oilers, Islanders, and Canucks in his 140 game NHL career scoring two goals and 12 assists.

​     With the third round pick acquired from Hartford in the Frank Pietrangelo trade, the Penguins selected left wing Greg Crozier from Lawrence Academy in Massachusetts. Crozier played in one game in the NHL - December 6, 2000 - in which he skated five shifts for 4:10 of total ice time.