On Saturday, December 18, 2021, I was made aware of two jerseys being offered for sale by John Balawejder of Double Deke Hockey. One jersey was a "1989-90" Road (Black) Set 3 jersey. The other jersey was a "1992-93" Road jersey. The research provided on this page focuses on the 1989-90 jersey which was NEVER WORN by Mario Lemieux.

​Below you will find the original photos that John Balawejder posted on his website. Despite saying that he's taken down the jersey, the jersey is still listed in the "store" at Double Deke Hockey here.

John listed the jersey as a "Set 3" which at face value, appears correct, but upon further examination, isn't correct at all.

One simple search on NHL.com or Hockey-Reference.com would show that Mario Lemieux didn't play one single game during the 11 game stretch that constituted the Set 3 Road (black) jerseys which were worn from February 24, 1990 through March 29, 1990.

Mario Lemieux's final road game of the 1989-90 season was on February 14, 1990 at Madison Square Garden against the Rangers.

John didn't do even the simplest of searches and certainly lacks the reference material and attention to detail (double elbow stitching) to determine if Mario Lemieux would have even worn the jersey during the time period in which he claims it was worn.

Over the last week, I've put together this page to document what I know about the jersey that John Balawejder tried to pass off as a legit game worn Mario Lemieux jersey from 1989-90.
Back in September 2001, Joe Tomon of J&J Distributing was offering two Mario Lemieux jerseys for sale at $7,500 each. I inquired about the jerseys and was sent two photos showing the fronts of each jersey. Additionally, Joe's inventory was photographed and displayed on Jim Kubus' website at the time. You can see the front/back images that were posted on Jim's site to the left of the images that Joe sent to me directly.

As a freshman in college, I began accumulating as many Pittsburgh Penguins jersey images as possible and I saved those images that Joe Tomon sent to me and that were posted on Jim's site that were a part of Joe's inventory.

Below are the images of the Road (black) and Home (white) Mario Lemieux jerseys that were being sold by J&J Distributing.

The Road (black) is the exact same jersey that John had been offering for sale until December 18, 2021. You can see identical markings on the front and back that match the jersey identically. The Home (white) sold by Joe Tomon back in 2001 was also never worn by Mario Lemieux; however, is not the subject of this page.
Below is the research that I've put together over the past week or so to prove that Mario Lemieux never wore the jersey that Joe Tomon sold to an unsuspecting collector back in 2001 and was subsequently purchased by John Balawejder from said collector in 2021 which was attempted to be sold by John to unsuspecting collectors for approximately $35,000.

Unfortunately, neither dealer did their due diligence when authenticating this jersey before attempting to sell it.

Here is my research which includes 139 images or screenshots from the 22 possible games in which Mario Lemieux could have worn the jersey in question. This includes 16 of the possible 22 games that have period-by-period screenshots showing Mario Lemieux wearing the gold toe penguin with the large block CCM logo on the back hem and the 1990 NHL All-Star Game patch nearly touching the yellow left sleeve shoulder yoke.

I was able to follow specific marks throughout the duration of this period and it is my opinion that Mario Lemieux wore just one Road (black) Set 2 jersey from November 4, 1989 through February 14, 1990.

The research started with determining when Mario Lemieux began wearing the 1990 NHL All-Star Game patch. Lemieux wore his Set 1 Road (black) jersey for the final time on October 28, 1989 at Montreal. The jersey he was wearing was sold by Heritage Auctions and was definitively video matched. You can clearly see the unique "C" on the front with the white twill connected at the top and bottom of the serifs to the vertical bar on the left.

Mario Lemieux and the rest of the Penguins begin wearing their Set 2 Road (black) jerseys with the gold toe penguin, large block CCM with no NHL logo, and the 1990 NHL All-Star Game patch sitting very low in the U-shaped shoulder yoke above the yellow on the left shoulder. 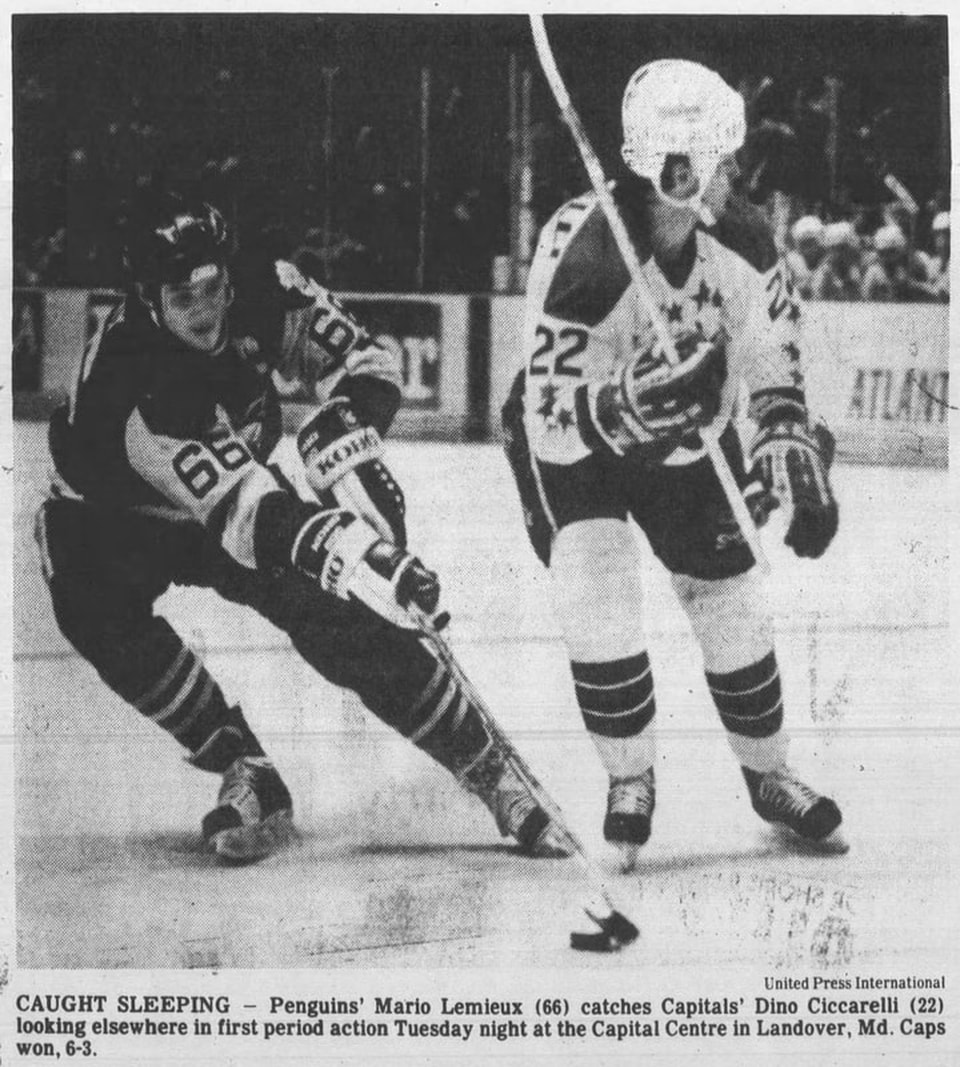 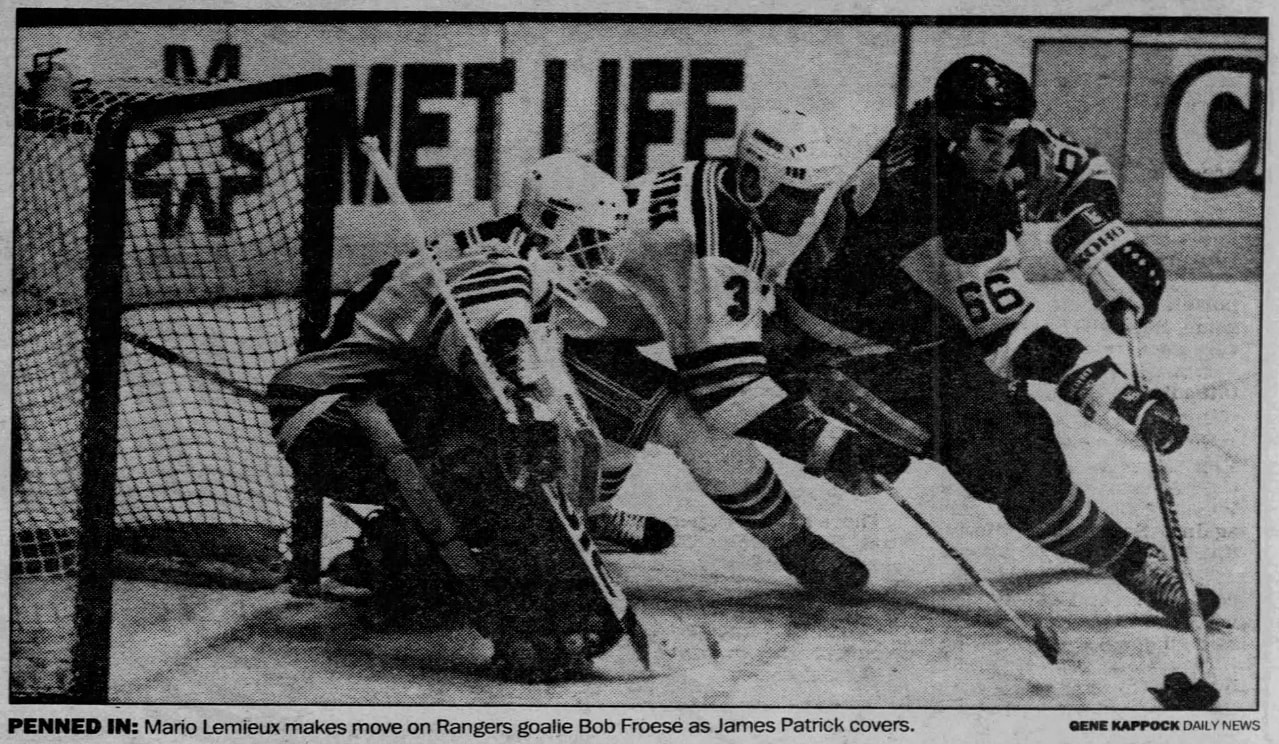 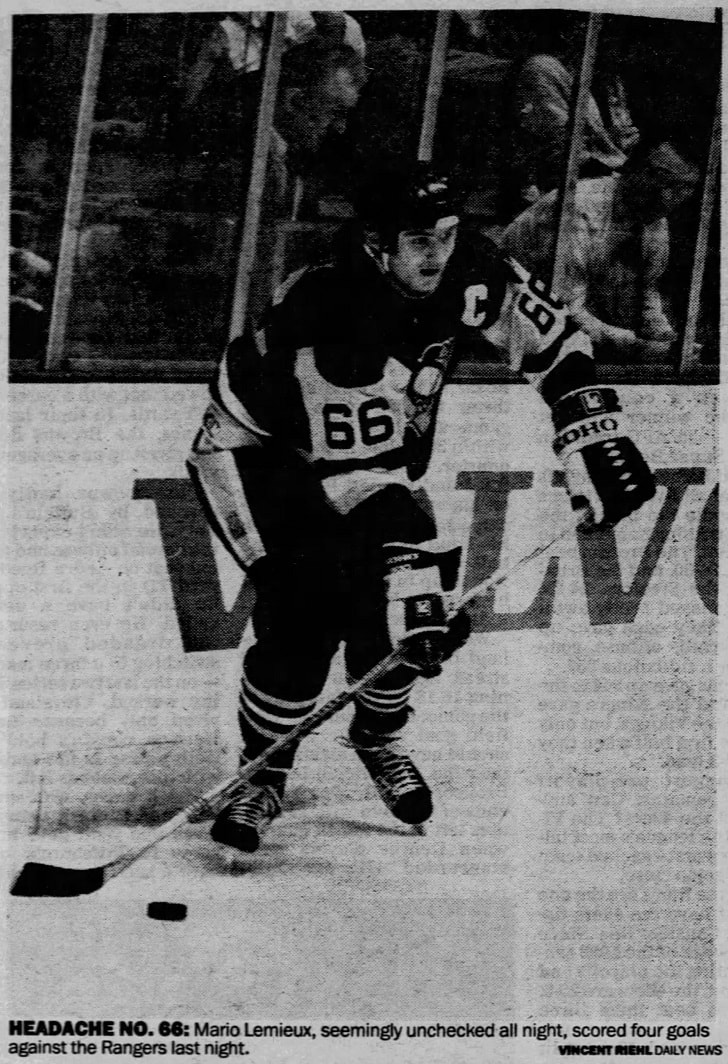 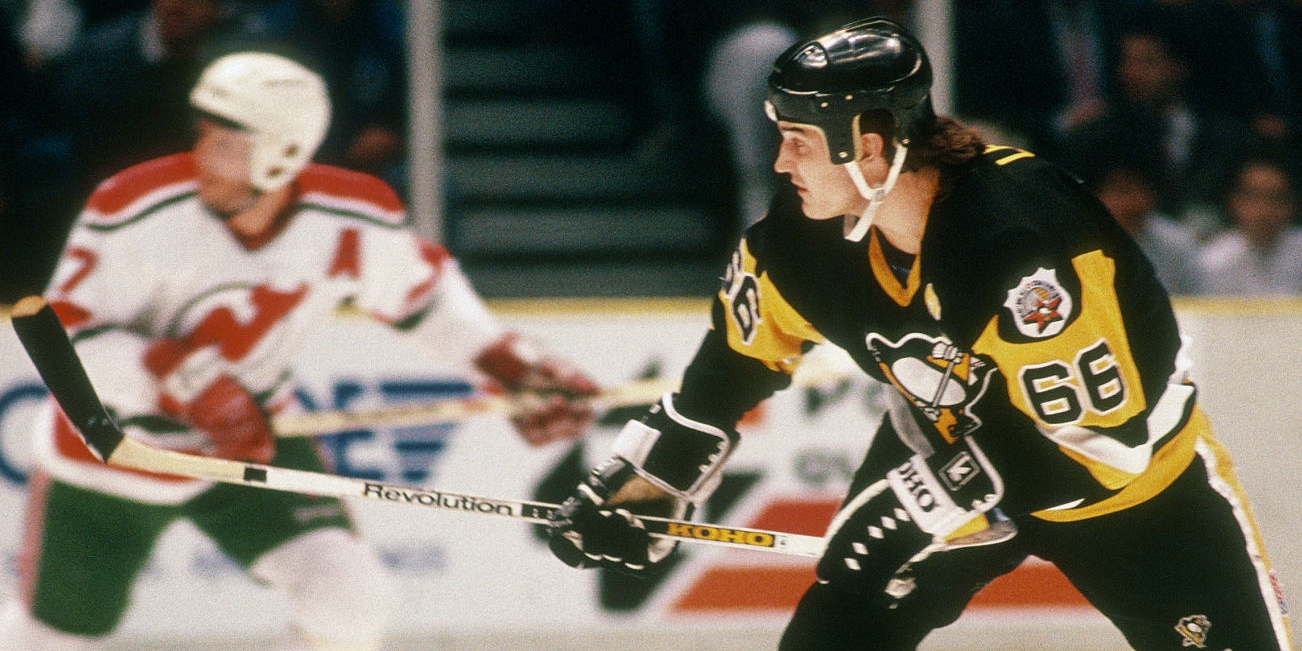 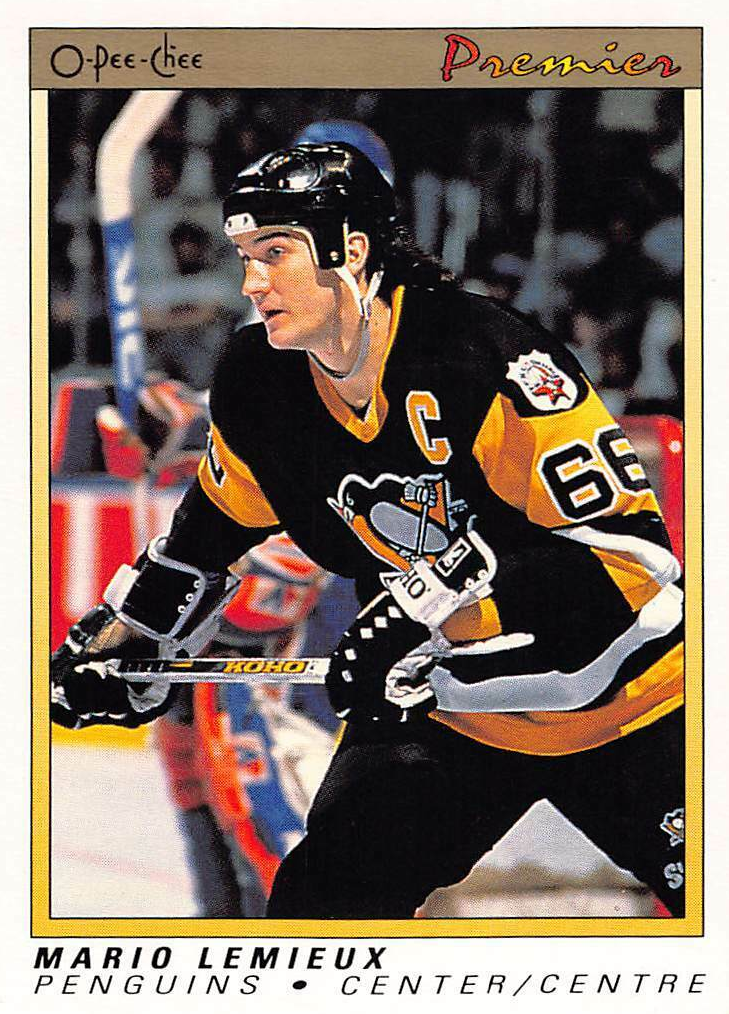 All three of these images I believe are from either December 31, 1989 or January 8, 1990 at Madison Square Garden; however, I've been unable to attribute them to either game specifically. Given the blonde KOHO stick in the images, the images were taken prior to January 10, 1990 when Lemieux first began using his KOHO Revolution stick.