Garry Swain
The 1968 NHL Amateur Draft was held on Thursday, June 13, 1968 at the Queen Elizabeth Hotel in Montreal, Quebec. The draft order was determined by the 1967-68 NHL standings with the last place team in the West Division drafting first followed by the last place team in the East Division, fifth place team in the West, fifth-place in the East, fourth through first in the West, and fourth through first in East. The Montreal Canadiens, who had the option to take the first two French-Canadian players in the draft in lieu of their regular picks, chose first and second overall, taking goaltender Michel Plasse of Drumondville (QJHL) and center Roger Belisle of Montreal North (Quebec Int.), respectively.

​​     Pittsburgh selected center Garry Swain from Niagara Falls (OHA Jr.) in the first round with the fourth overall pick. Swain played in nine games for the Penguins during the 1968-69 season and made his NHL debut on January 25, 1969 vs. Toronto. He scored his first NHL goal on March 29, 1969 at Philadelphia. Swain would go on to play three seasons in the WHA with the New England Whalers from 1974-75 to 1976-77. 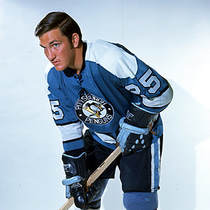 Ron Snell
​​     In the second round, the Penguins selected right winger Ron Snell from Niagara Falls (WCHL). Snell played in parts of two seasons with Pittsburgh making his NHL debut on March 25, 1969 at Minnesota and scored a goal in his first game. He scored in his first three games of his NHL career and had four points in four games during his rookie season. The following season, Snell played in just three games and had one assist. He would go on to play for the Winnipeg Jets of the WHA for two seasons - 1973-74 and 1974-75.